Microphones have many different uses and applications from recording studio to live performance and, in a similar way to instruments, no two microphones will have the exact same properties. With this in mind, we always keep a huge range in stock from simple USB microphones for basic home recordings to diaphragm condensers and vintage style ribbon mics for professional recording studios. We are proud to stock some of the best microphone brands in the world including Sontronics, sE, Rode, Shure, AKG and Audix and they are all available to buy online or in-store.

Here at Absolute Music we are not just a music shop, we also have a suite of rehearsal rooms and a recording studio, which means that we use microphones on a very, very regular basis. This ensures that we have a working knowledge of the microphones that we sell and will happily answer any questions that you may have. You should also keep an eye on the blog where we regularly write about new products and showcase video demos of selected microphones in action. 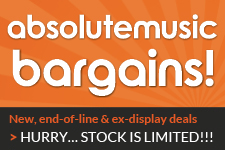